Year 3 children have been learning about Mythical Creatures in their topic, and light and shadows in science.

The children began by researching a number of mythical creatures, including: Pegasus (winged horse), Minotaur (a monster with the head of a bull and the body of a man) and Griffin (a creature that combines the body of a lion and the head and wings of an eagle), before setting about designing and creating their own.

They drew their designs onto black card, focusing on the outside shape, before cutting them out.  They then set about including some of the detail, for example: facial features, feathers or wings, which was cut out by artist Andrew Tims with a craft knife.

The resulting artwork, features all of the children’s mythical creatures, photographed behind tracing paper using an artificial light source to illuminate the cut-out creatures and create shadows. 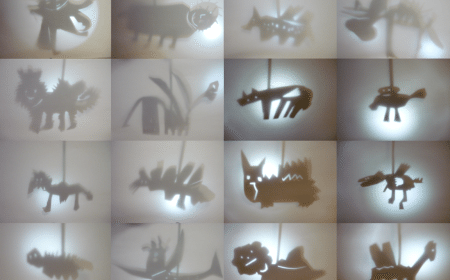